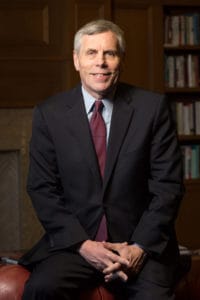 Skip Rutherford has served as dean of the University of Arkansas Clinton School of Public Service since 2006. Prior to joining the Clinton School, Rutherford was executive vice president of Cranford Johnson Robinson Woods, one of the region’s largest communications firms. In addition, he served as chairman of the board of the William J. Clinton Foundation from 1997-2006. From 1997 until it opened in 2004, Rutherford also supervised the planning for the Clinton Presidential Library.

He is a former administrative assistant to U.S. Senator David Pryor, (D-AR), past president of the Little Rock School Board and has been active in numerous campaigns and initiatives at the local, state and federal levels.

He coordinated the 40th anniversary commemoration of the 1957 crisis at Little Rock Central High School. He also coordinated the dedication of the Northwest Arkansas Regional Airport, only the third new commercial airport to open in the last 25 years. He is a member of the Board of Directors of Arkansas Children’s Hospital, Lyon College and a founding member of the Little Rock Central High Museum and Visitor Center Board.