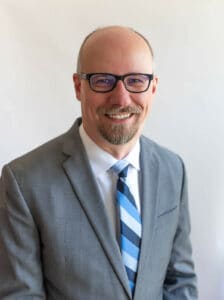 University of Arkansas System Chief Information Security Officer Eric Wall has been named to the Forge Institute Advisory Board, adding to a membership already composed of many of the nation’s most impactful leaders in cyber and data security.

“I believe that Forge Institute’s work is helping to make Arkansas a rally point for all things cyber,” said Wall,  who has extensive IT experience in healthcare, insurance, telecommunications, technology and higher education.

“Cybersecurity has no borders, so there’s no reason that Arkansas cannot become the Silicon Valley of cybersecurity,” Wall said. “I am extremely excited to work with Forge to help make this a reality.”

Eric Wall has spent the past 25 years solving IT problems and securing organizations from global cybersecurity threats across public and private sectors. He has gained a reputation for partnering with business to make sure that cybersecurity has a seat at the table. Wall was named the first CISO at the UA System in April and has been focused on securing employee, student and patient data for its more than 20 campuses, divisions and units statewide.

Wall served as the Deputy Chief Information Security Officer for the University of Arkansas for Medical Sciences until April of 2022, when he was named the Inaugural Chief Information Security Officer for the UA System.  In this role, he partners with all 22 UA System campuses, divisions, and units to identify, measure, and mitigate their cybersecurity risk. Wall was previously deputy CISO at the University of Arkansas for Medical Sciences (UAMS) and also served as manager of system administration when he joined in 2018. He was also previously a lead/supervisory network engineer at Arkansas Blue Cross Blue Shield and lead network analyst III at Windstream Communications in Little Rock. Before relocating to Little Rock in 2008, he worked as CIO of Electrical Wholesale Supply Co., Inc. of Forrest City and as a business analyst – revenue cycle at Baptist Memorial Health Care Corp. in Memphis, Tenn. Wall is a Certified Information Security Manager (CISM) and a Certified Information Systems Security Professional (CISSP).

“Alongside other efforts to unify the UA System’s digital platforms, including the ongoing implementation of its new enterprise resource planning project, arose a need to solidify its efforts to identify, address and maintain any IT risks facing the system,” said Steven Fulkerson, chief information officer for the UA System. “Mr. Wall not only has an understanding of the cybersecurity challenges that are present in today’s workplace, but he also has extensive experience working within the UA System and leading projects across multiple campuses.”

The Forge Institute Board of Advisors’ membership includes cybersecurity, data science and infosec professionals from the private and public sectors.