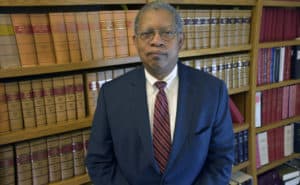 Harold J. Evans, associate vice president legal and research, in the Office of the General Counsel at the University of Arkansas System, has been honored with the Harvard University Miller-Hunn Schools & Scholarship Award for his many years of helping to recruit and interview applicants to his alma mater.

Evans, a 1974 graduate of Harvard University, has met and interviewed more than 200 students vying for acceptance at the institution during his time as chair of the Schools and Scholarship Committee of the Harvard Club of Arkansas, which oversees interviewing efforts statewide.

“This is our way of expressing our profound thanks for the incredibly important work our alumni and alumnae have done in the field to help the Admissions Office accomplish its mission each year,” said William R. Fitzsimmons, dean of admissions and financial aid at Harvard.

The award was announced virtually from Cambridge, Mass., Oct. 23 at the fall meeting of the Harvard Alumni Association Schools & Scholarships Committee.

Evans said the rewarding work of meeting and interviewing hundreds of potential Harvard students from across Arkansas has resulted in countless inspirational stories.

“Many years ago I interviewed a young man from Helena-West Helena – one of the most impressive applicants I’ve ever interviewed – who gave me insight into the racial tensions that exist there and he expressed a desire to return to the area to contribute to social change,” Evans said. “He was admitted, and years later I was attending my daughter’s high school basketball game in that part of the state and coincidentally bumped into this former interviewee who had become a teacher there as part of Teach for America. We recognized each other and I may have gotten a bit misty eyed when speaking to him. It was one of many truly satisfying moments for me that this work provides.”

At the end of interviews, Evans said he always asks students if they have any questions for him, with most wanting to learn more about his experience at Harvard.

“I begin with a brief history lesson about what was happening during that time from 1970-74 – the Vietnam War, the Black Power movement and anti-Apartheid activism, among other major issues of the time,” Evans said. “As part of the ‘Mass Hall 40’ that notoriously occupied the building on campus for a week that resulted in a semester-long suspension during my sophomore year, I seem to gain a certain amount of respect in the students’ eyes and it offers a way to connect on a personal level.”